We had a great lesson brought to us in our Sunday School class yesterday and I thought that it would be great to share that here. Hopefully I can do it justice going off my notes and my memory.

Abraham – who we all know – was promised a son, and after waiting and waiting, he finally got that promised son – Isaac. But in Genesis 22, we begin the story of Abraham and Isaac, a story which for many people prompts the question “Why did God tell Abraham to do this?” So we’re going to follow through the story to really understand what was happening here, and to see Abraham’s obedience – no matter the cost.

In the first verse, the KJV read that God “tempted” Abraham; the NKJV version reads God “tested” Abraham. The KJV generally is a good translation but in this case the translators made a poor decision on what word to use. The Hebrew word here is “nasa” which is more accurately translated as “prove” or “test.” So the first thing to understand is that God was not tempting Abraham – that’s not something God does. God was proving Abraham as a faithful and righteous man.

God came to Abraham, and in verse 2 He said this:

2 Then He said, “Take now your son, your only son Isaac, whom you love, and go to the land of Moriah, and offer him there as a burnt offering on one of the mountains of which I shall tell you.”

What would you do if you were Abraham, and you finally got the son that you were promised and waited so long for, and then you were told to take him and offer him as a sacrifice? Would you refuse? Would you try to bargain? Would you try to put it off? I’m sure most people would try to do something, right?

But Abraham was steadfast in his faithfulness to God. Look at verse 3:

3 So Abraham rose early in the morning and saddled his donkey, and took two of his young men with him, and Isaac his son; and he split the wood for the burnt offering, and arose and went to the place of which God had told him.

Now, we don’t know for certain if Abraham did try to do any of those things we mentioned, but what is revealed to us in scripture is that he rose early in the morning and set out to do what God had commanded of him. I’m sure it wasn’t going to be easy for him, but this is what God wanted so that’s exactly what Abraham was going to do.

Continuing on in the story, Abraham, Isaac, and the two young men traveled together for 3 days until Abraham saw the place that God wanted him to go. So he told the two young men to stay where they were, and he and Isaac would continue on. Let’s pick up in verse 6.

6 So Abraham took the wood of the burnt offering and laid it on Isaac his son; and he took the fire in his hand, and a knife, and the two of them went together. 7 But Isaac spoke to Abraham his father and said, “My father!”

Then he said, “Look, the fire and the wood, but where is the lamb for a burnt offering?”

8 And Abraham said, “My son, God will provide for Himself the lamb for a burnt offering.” So the two of them went together.

In looking at these verses together, the majority of people will assume that Isaac must have been pretty young. He knew they didn’t have any animal for the offering, and through what is commonly believed to be youthful naivety, just believed his father when we said that “God will provide” and animal to offer. But look at verse 6 again:

Let’s think about this logically. We know typically in the Bible that a male is considered a lad until they are 30, and then they are considered a man. This is also the reason why Jesus started His ministry at age 30, but that’s beside the point. So we know Isaac is still a lad. But think about how much wood it takes to burn a body. Do you think that a 10 or 12 year old boy could carry enough wood up a mountain to burn his body? Probably not. So this gives us good reason to believe that while Isaac was not yet a man, he was likely well into his late teens or 20’s to be physically capable of carrying that much wood up a mountain on his own back.

The second thing I want to point out here is in verse 8. Abraham says “God will provide for Himself that lamb for a burnt offering.” This is another interesting choice in translation, because the Hebrew word here for “provide” is “ra-a,” which typically means to see or to look upon. So instead of Abraham telling Isaac that God would provide a lamb, he was really telling Isaac that God was looking at the lamb!

9 Then they came to the place of which God had told him. And Abraham built an altar there and placed the wood in order; and he bound Isaac his son and laid him on the altar, upon the wood.

Think back to the point that was made about Isaac. He was strong enough to carry enough wood on his back up a mountain, right? So why was he not strong enough to whoop a 100+ year old man? The Bible doesn’t reveal this to us, but thinking logically again, the only way a 100+ year old man could bind someone who strong enough to carry that much weight up the mountain is if the stronger person is submissive. And even when Isaac is laying on the altar, we don’t see him putting up a fight, crying for help or in fear – nothing. From these events, it must be that Isaac had figured out that this is what God had asked for, and just like his father, he was ready to be obedient and loyal to God.

Now, we know that the Angel of the Lord (who in the OT is Jesus, more on that some other time) came and stopped Abraham, and him and Isaac sacrificed a nearby ram and came down from the mountain together. But there are some similarities that we can draw between this and another story – the story of Jesus.

Carried his own wood — Carried His own cross

21 Was not Abraham our father justified by works when he offered Isaac his son on the altar? 22 Do you see that faith was working together with his works, and by works faith was made perfect? 23 And the Scripture was fulfilled which says, “Abraham believed God, and it was accounted to him for righteousness.” And he was called the friend of God.

It wasn’t by faith only that Abraham was justified in the Lord’s sight. It was the faith and the obedience of his actions that justified Abraham. It wasn’t enough for Abraham to believe God, to believe that there is a God; it was with faith and his works of faith that he was accounted as righteous. Abraham wasn’t looking to earn favor with God for his own benefit, he wasn’t following along for his own personal gain, he wasn’t trying to earn greatness or anything like that. He was obedient to God because of his faith in Him, knowing that God has a reason for requiring these things of him.

24 You see then that a man is justified by works, and not by faith only.

If anyone ever tells you that there is nothing required of you except that you have faith in God and Jesus, you can know that person is not teaching in spirit and in truth as the scriptures teach. We are justified by our works – our works of faith and obedience according to what God has told us to do. This includes repentance, baptism, even personal sacrifices. We have to give up things that are of the world in order to live as a faithful Christian. God has always wanted our very best; not our leftovers, not out indifference, not our laziness. If we truly want to live to please God, then we must follow his commandments and be obedient to the end. 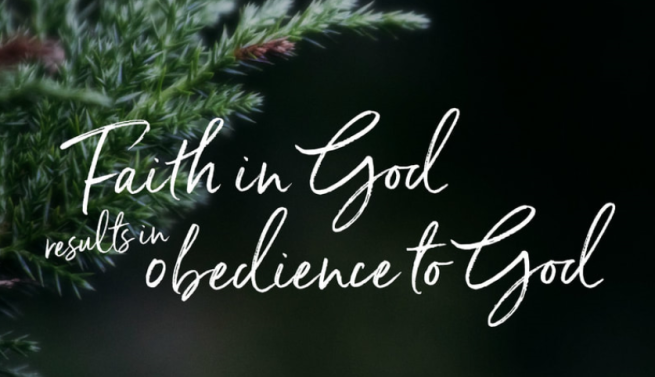 As always, thanks for reading. I invite you to reach out with a comment or message if you have any questions. If you enjoy this post, I encourage you to share it with others to spread the word!

Published by Christ Made Simple

View all posts by Christ Made Simple