It’s probably safe to say that most people like the buffet. Otherwise places like Golden Corral or your local Chinese buffet would be out of business.

There’s a reason these places are so popular – there’s something for everyone. Something that is going to fulfill your desires, specifically to eat. But did you know there’s a lot of that food on that Chinese buffet you love so much that isn’t even Chinese?

But regardless, the Chinese buffet is delightful. Even if it’s not authentic Chinese. For some, the same can be said about Christianity.

If you were to ask someone if they were a Christian, there’s a lot of people who would say yes. Webster defines a Christian as “a person who professes belief in the teachings of Jesus Christ.” That’s a pretty short definition, but I do think it sums up what a true Christian is.

But there’s a fundamental problem with Christianity in today’s society. The problem being that often times, it resembles that Chinese buffet that were just talking about.

The problem is, as with the buffet, with all this variety often times the authenticity is completely lost. These churches may delight our senses, tickle your ears, get your adrenaline pumping, or generally make you feel better about the way you’re living your life. This form of “Christianity” does not remotely resemble the example that has been laid out for us in the pages of the New Testament.

But this isn’t just a problem with modern American society – this has been going on for quite some time!

Oh, that you would bear with me in a little folly—and indeed you do bear with me. 2 For I am jealous for you with godly jealousy. For I have betrothed you to one husband, that I may present you as a chaste virgin to Christ. 3 But I fear, lest somehow, as the serpent deceived Eve by his craftiness, so your minds may be corrupted from the simplicity that is in Christ. 4 For if he who comes preaches another Jesus whom we have not preached, or if you receive a different spirit which you have not received, or a different gospel which you have not accepted—you may well put up with it!

6 I marvel that you are turning away so soon from Him who called you in the grace of Christ, to a different gospel, 7 which is not another; but there are some who trouble you and want to pervert the gospel of Christ. 8 But even if we, or an angel from heaven, preach any other gospel to you than what we have preached to you, let him be accursed. 9 As we have said before, so now I say again, if anyone preaches any other gospel to you than what you have received, let him be accursed.

Thus you have made the commandment of God of no effect by your tradition. 7 Hypocrites! Well did Isaiah prophesy about you, saying:

8 ‘These people draw near to Me with their mouth,

And honor Me with their lips,

But their heart is far from Me.

9 And in vain they worship Me,

Teaching as doctrines the commandments of men.’ ”

That is the point we should all find ourselves at. We should not – we cannot – look to the traditions of men and practice those things as worship or doctrine. We must look for teachings that point to the Bible and the Bible alone as the sole authority for worship, doctrines and other practices. Sincere men seeking the authentic Christ should not be satisfied with men telling them what they want to hear.

So now you may be asking, “What are the commandments of God?” or “How do I avoid these teachings of men?”. There are a lot of false doctrines out there, and every person has an individual responsibility to search the scriptures to find out if what you’re being told is true. We will surely cover a lot of these false doctines in the future, but for the sake of staying on topic, we will take a look of some of those another time.

Remember, true Christianity cannot be found on a buffet. The only place you can find it is in the pages of the New Testament. 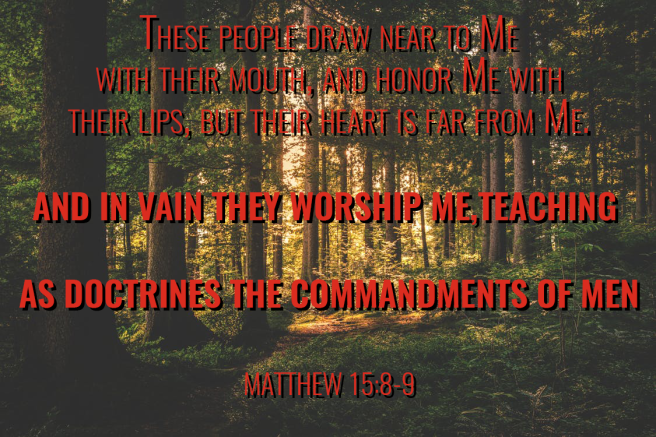 Thanks for reading! If you have any thoughts or questions, feel free to leave a comment and share those ideas. We would love to hear from you!

Published by Christ Made Simple

View all posts by Christ Made Simple